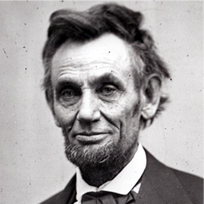 Abraham Lincoln (February 12, 1809 – April 15, 1865) was the 16th President of the United States, serving from March 1861 until his assassination in April 1865. He led the country during the Civil War (1861-1865). Lincoln helped end slavery in the nation and helped keep the American Union from splitting apart during the war. Lincoln's Gettysburg Address, second inaugural address, and many of his other speeches and writings are considered by many as classic statements of democratic beliefs and goals.

A presidential biography from WhiteHouse.gov.

An online exhibit at the National Museum of American History

Photos and information about his birthplace in Kentucky.

From the American Memory, Library of Congress, the online presentation of the Abraham Lincoln Papers comprises approximately 61,000 images and 10,000 transcriptions.

A timeline of President Lincoln's presidency, many great photos, and Civil War information.

The Utah Education Network gathered these resources in celebration of Lincoln's 200th birthday.

Learn about Lincoln’s leadership by exploring the political choices he made.

How well do you know Lincoln?

31 short video segments from "Lincoln: ‘I, too, am a Kentuckian’" produced by KET.