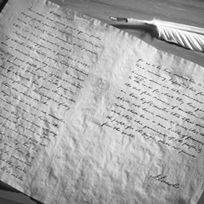 About the Gettysburg Address:

President Lincoln delivered the 272 word Gettysburg Address on November 19, 1863 on the battlefield near Gettysburg, Pennsylvania. In the battle at Gettysburg over ten thousand Americans lost their lives. This famous speech was given at the dedication of the cemetery for Union soldiers who fought and died in the battle. In the address Lincoln expressed the importance for Americans to remember the sacrifice made by these soldiers. Even though the speech was barely 3 minutes it has become one of American's most famous speeches of all time.

"Fourscore and seven years ago our fathers brought forth, on this continent, a new nation, conceived in liberty, and dedicated to the proposition that all men are created equal.

Now we are engaged in a great civil war, testing whether that nation, or any nation so conceived, and so dedicated, can long endure. We are met on a great battle-field of that war. We have come to dedicate a portion of that field, as a final resting-place for those who here gave their lives, that that nation might live. It is altogether fitting and proper that we should do this. But, in a larger sense, we cannot dedicate, we cannot consecrate—we cannot hallow—this ground. The brave men, living and dead, who struggled here, have consecrated it far above our poor power to add or detract. The world will little note, nor long remember what we say here, but it can never forget what they did here.

It is for us the living, rather, to be dedicated here to the unfinished work which they who fought here have thus far so nobly advanced. It is rather for us to be here dedicated to the great task remaining before us—that from these honored dead we take increased devotion to that cause for which they here gave the last full measure of devotion—that we here highly resolve that these dead shall not have died in vain—that this nation, under God, shall have a new birth of freedom, and that government of the people, by the people, for the people, shall not perish from the earth."

This text is a transcription of the “Bliss Version” of the Gettysburg Address, housed in the Lincoln Bedroom at The White House in Washington, DC. Download a printable PDF version.

To celebrate the 150th anniversary of the Gettysburg Address, documentarian Ken Burns, along with numerous partners, has launched a national effort to encourage everyone in America to video record themselves reading or reciting the speech.The collection of recordings housed on this site will continue to grow as more and more people are inspired by the power of history and take the challenge to LEARN THE ADDRESS.

Watch videos of famous, and not so famous, Americans reciting the Gettysburg Address.

Now it is your turn. Record yourself reciting or reading the Gettysburg Address and then share it.

Listen to the Gettysburg Address

Harry E. Humphrey recited the Gettysburg address on Feb. 20, 1914. This recording is from the Library of Congress' National Jukebox, which makes historical sound recordings available to the public free of charge.

Historical Backdrop for the Gettysburg Address

This five-minute video excerpt from Ken Burns’ The Civil War will help us understand the historical backdrop for the Gettysburg Address. See more from The Civil War.

Gettysburg Address Music by Kevin G. Pace and vocals by Charlene Lundell. Non-commercial-educational use only. Download the sheet music.

The Gettysburg Address – In 4 Minutes

Historian Jared Frederick explains the main points of President Lincoln's address and what the speech meant to Americans. This video is part of the Civil War Trust's In4 video series, which presents short videos on basic Civil War topics.

Learn more about the Gettysburg Address:

This sample performance assessment has 9th and 10th grade students to read the Gettysburg Address closely and then complete various discussion and writing activities.

The Gettysburg Address, from Cornell University

Cornell University has one of the five original copies of the Gettysburg address. View this copy and the accompanied documents and addition resources online.

Gettysburg Exhibit, from The Library of Congress

The Library of Congress has two of the five know manuscripts of the Gettysburg address. Learn more about the manuscripts and how they are being preserved.

Photo of Abraham Lincoln at Gettysburg

This is the only known photograph of President Lincoln at Gettysburg.